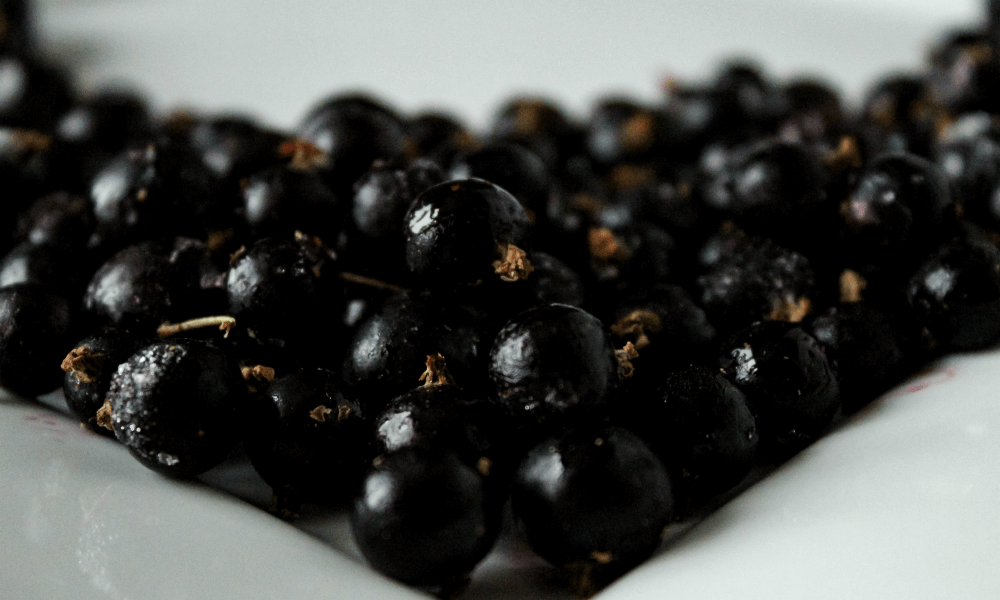 The holidays were over, but I still couldn’t pull myself together and start writing again. Dark days and cold weather were not helping at all. On the positive side, we finally bought a camera and I was spending weekends making and taking pictures. That means I started browsing Instagram more often and there I found the missing piece of information to complete my article.

I had the idea to write about black currant for awhile. When Canada became our new home sixteen years ago, we were surprised by the limited choice of fruits available in most Ontario supermarkets. Apples, for example, were represented by yellow, red and green type (Golden Delicious, Red Delicious and Granny Smith). Seemed like the selection was made based on the traffic light colours and all of them were brought in from US.

There were only three kinds of berries: strawberry, raspberry and blueberry. Later, blackberries, in small quantities, appeared on the shelves. The frozen and preserved versions of the same selection were the only ones available. Back in Ukraine, when I was a child, raspberries and blueberries were used mostly for medicinal purposes. Strawberries were a bit more expensive and were used for desserts. Cherry (the tart/sour kind), an iconic Ukrainian fruit, was and still is very popular. We make cherry jams, spreads, desserts, juice and wine. And there were also a very affordable, no less delicious, and fragrant red and black currants as well as gooseberries. Cherries do grow in Ontario, but are not used widely and not easy to find. Buckets of frozen cherries appear sometime in August in some stores and this is your chance to stock up – they will be gone in no time. Currants, we couldn’t find anywhere fresh nor frozen.

In the beginning, we thought that these berries just simply cannot grow here. And, to be honest, at this time we had no interest in investigating further. Until last summer, when I got a sudden urge to start making new desserts. In June and July, I was using strawberries, raspberries and Saskatoon berries for this purpose. Then at the end of July, we went to Quebec and visited Île d’Orléans – an island which is located on the Saint Lawrence River, about 5 kilometres east of downtown Quebec City. Have you ever been there? Highly recommend – stunning scenery, a lot of nice places to visit.

We stopped at Sainte-Petronille winery; of course, we took pictures and bought some wine.

One of the wine bottles had a tiny bottle of “Sirop De Cassis” (Black Currant Syrup) attached, which was made on Île d’Orléans.

Now we were puzzled. How come black currant can grow in Quebec, but is nowhere to be seen in Ontario?

When we came back, we kept searching on the internet and in farm stores. I found spreads and jellies made of black currant, but not the berries themselves. In November, we attended the One Of A Kind Show in Toronto, where we met the producer of the syrup we bought in Quebec – Cassis Monna & Filles. From them, we have learnt that black currants were banned for a long because they carried a decease affecting pines. I started searching more and found out that yes, currants were banned in the US for the greater part of the 20th  because white pine blister decease was brought with them from Europe. And even though in Canada there was no ban, these berries disappeared and were forgotten as well.

We bought very delicious black currant jelly and a big bottle of syrup from Cassis Monna & Filles. But for desserts I make I need berries either fresh or frozen. I prefer to make fruit puree myself, because then I can control the thickness and sweetness.We already started preparing ourselves to go to Quebec to stock up on black currants during the summer. And I decided to write an article about why black currants are not available in Ontario. But then, a miracle happened. Centre & Main Chocolate Co., whom we follow on Instagram, mentioned Popham Lane Farm in their post – apparently, they were using black currants grown on this farm.

After that, we found the Popham Lane farm on Instagram and Facebook. Most farms are closed for the winter, but we decided to try our luck. We contacted them on Facebook and got invited.

One Saturday morning, we went to Brighton. All week the weather was crazy cold and snowy. As per forecast, that was the only day with no snow, so we couldn’t wait any longer. After an hour drive on snowy roads, we arrived in front of a very nice-looking house.

We were greeted by Joe and Priscilla, and they told us their story.

Joe (77) – after a career in military, another at Correction Canada and another in custom upholstery – bought this property in 1982. He wondered what he can do with this land. He thought about growing berries and, being of British heritage, decided to choose black currants. During wartime, the British government encouraged cultivation of these berries because of its high content of vitamin C (three times more than oranges).

At this time, decease-resistant varieties of black currant plants were discovered. Joe purchased his first 1,250 plants. You’d think it wouldn’t be an easy task to plant them all manually – Joe then invented a tool which allows him to drill 480 holes per hour and just drop in the plant plugs.

Now, they have about 13,000 black currant bushes, and Joe is working on improving the harvesting and washing process. He showed us a prototype of a washing station he’s planning to build for next season. This is just mind-blowing! This man doesn’t just have tons of ideas – he knows exactly how to put them to use.

Joe and Priscilla supply fresh and frozen black currant; they also make their own jam and sauce, which are very delicious and can be purchased in several locations.

We were so happy! First of all, we finally found a black currant supplier. Second of all, we met amazing people – Joe and Priscilla. I think, what they are doing is setting a great example for everyone of how to live your life – never stop creating and inventing, never stop moving and learning

Filed Under: About Anything, About Food, Farms
Holiday Markets